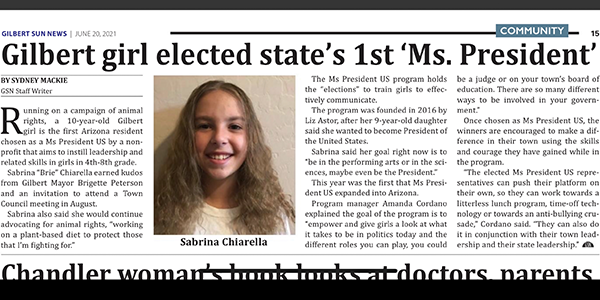 A student at Centennial Elementary has been chosen as Ms President US by a nonprofit that is dedicated to motivating and preparing girls to aim for the highest civic leadership positions.

Sabrina Chiarella, a fifth-grade student at Centennial, was elected as Ms President for a campaign she ran on animal rights.

Ms President US teaches girls the importance of female involvement in public service, the responsibility it entails, and the opportunity it provides. Only nine elected presidents were chosen and represent three states, with Sabrina being the only individual elected for Arizona.

Through this program, girls learn about public speaking, diplomacy and listening skills, local/state/federal government, and women’s history while having an opportunity to meet and greet exemplary female leaders.

Ms President US launched in 2017 in Ridgefield, CT, however, this is the first year the organization has expanded to Arizona. In recognition of this honor, Sabrina was invited to attend a Town Council meeting in August by Gilbert Mayor Brigette Peterson.